As a rule, in December I don’t race. My season usually starts in January and ends in November, so it is nice to have a month to recover and train. As the first race of my next season is in mid January and it is nothing less than The Spine Race – 268mile nonstop running race in the middle of England winter, where I am known as The Czech Machine. In December I am usually in full training for this event. But I made an exception this year. In fact I made more exception this year – I raced at 50miler two weeks ago, I raced a 100miler one week ago and then… everything just happened too quickly.

Week before Spartan Iceland Ultra I had no idea that the race ever existed. But as soon as I heard about the race, the seed was planted. For long time I have considered to try an Ultrabeast at some vague point in the future. But now it was here and now – 24 hours, cold and possibly adverse weather, right for me. But it is a Spartan Race – sport I have never done before. Should I go? Well, I could. Is it wise? No, it’s not. But most of my racing can’t be considered wise. Long story short – on Wednesday evening, with less than 3 days to go, I decided to go. Registered for the race, flight tickets and hostel booked, here we go. Packing in hurry, but once I boarded the train to the airport (Thursday noon), everything was just smooth and relaxed. Got a good sleep at Edinburgh airport and on Friday at 3PM I was at Harpa center, Reykjavík, Iceland. Just in time. At the hostel I packed all my stuff for the TA into one bag and was able to hit the sack before midnight to bank some sleep before the race. 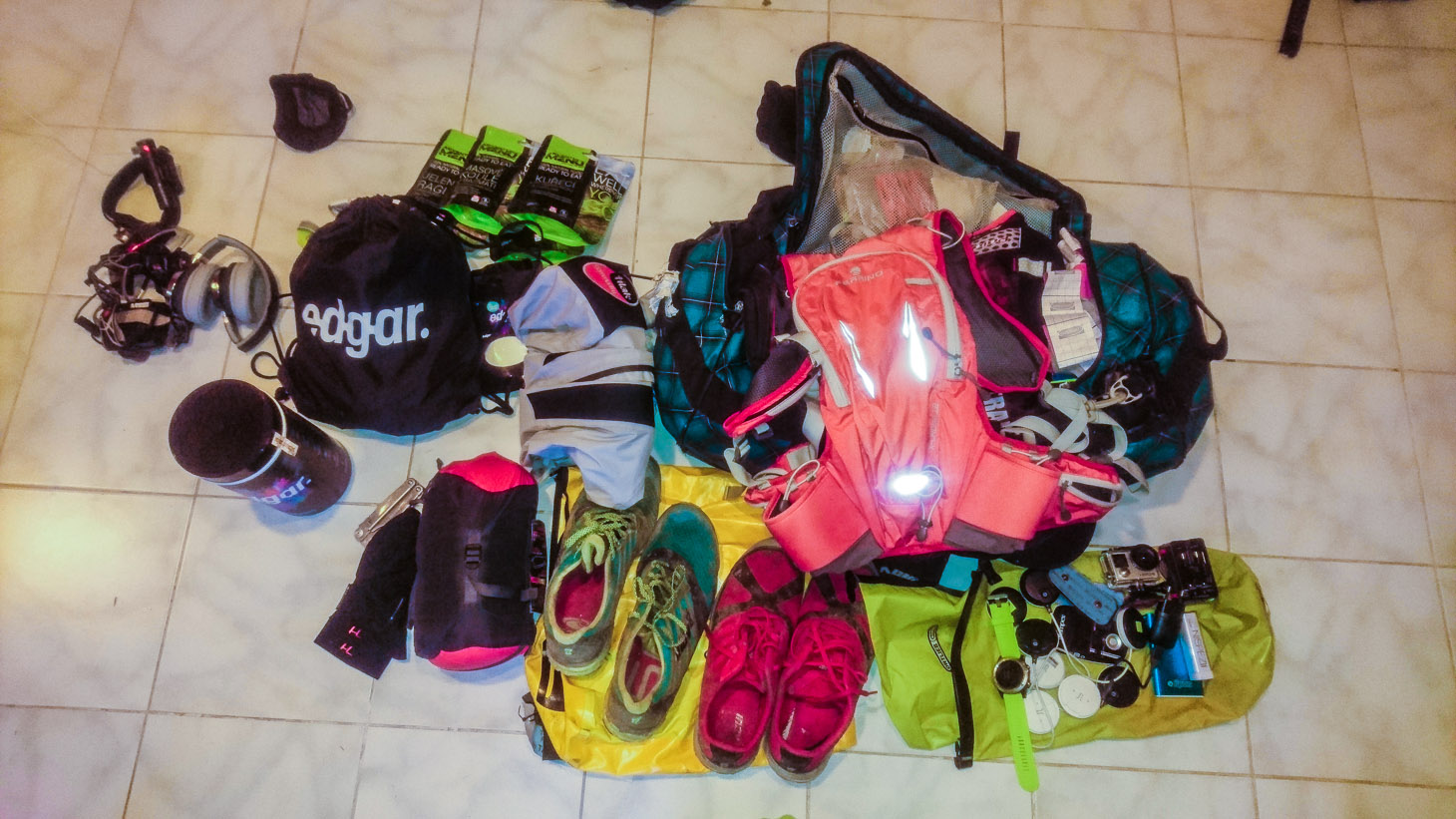 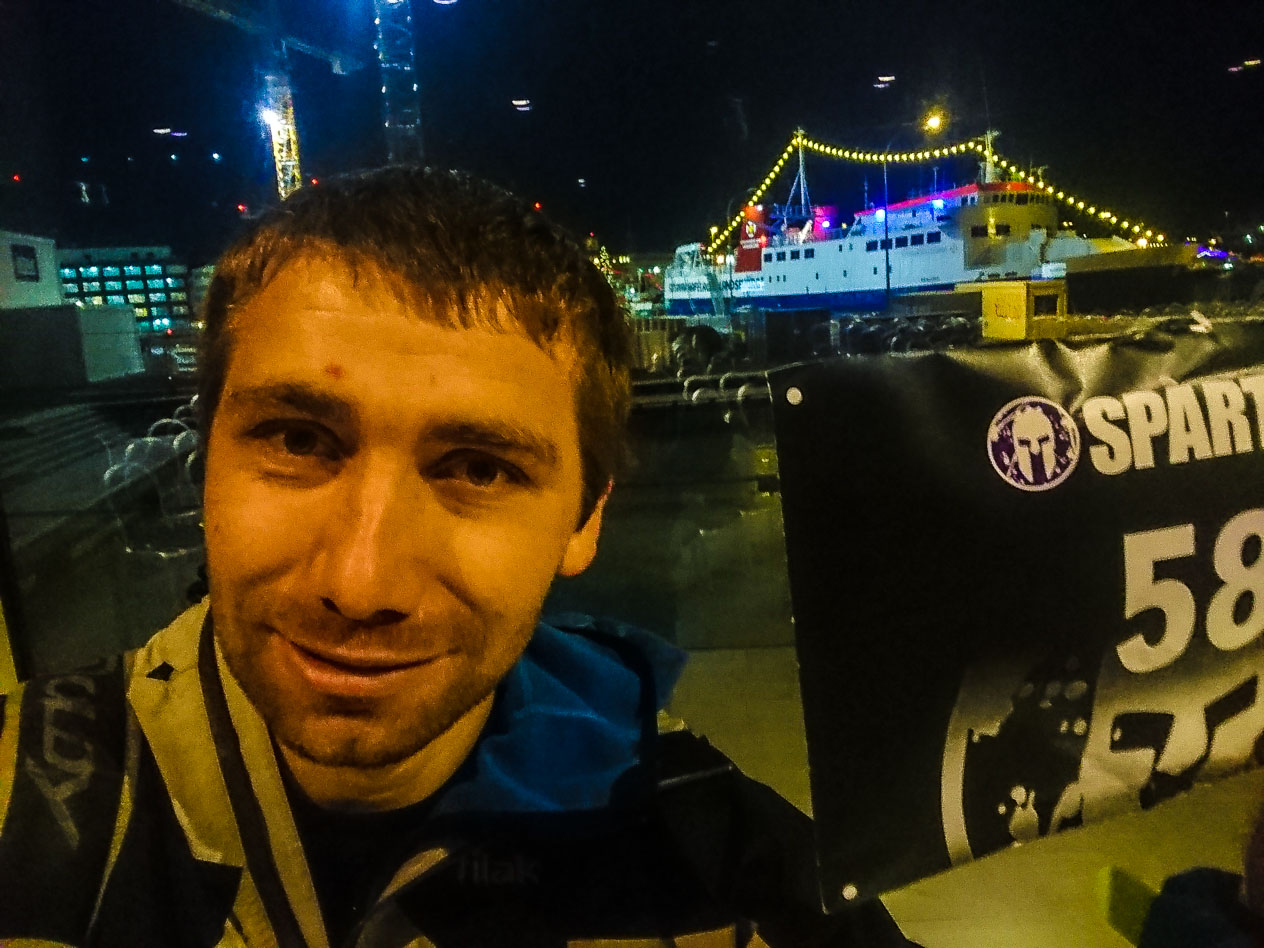 Iceland, I made it here! 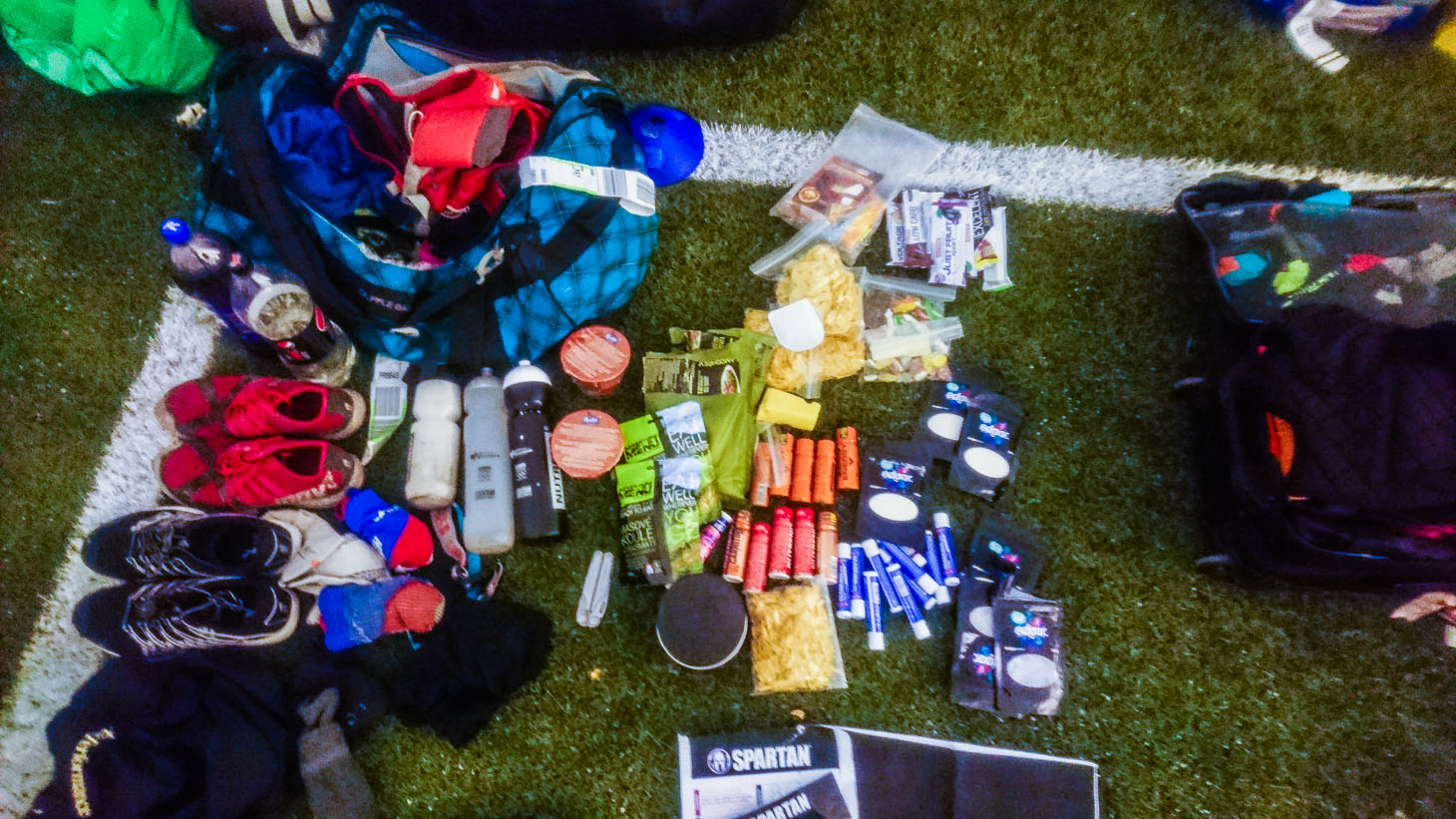 When I got to Hveragerði, at 10 AM, it was still dark. 75 minutes was more than enough to put all things into the TA as I had a clear idea what to take in the TA. Icelandic priest recited some prayers, we listened to both Icelandic and US anthems and here I was, standing at the start line of my first Spartan Race ever.

The Czech Machine vs. Spartans

As I said, I have never done any Spartan Race before. But I have done many ultratrails, expedition races and other crazy events. I ran for couple of days non-stop, sometimes in pretty harsh conditions (One race to note – The Spine Race – here I got my nickname – The Czech Machine). As it seems, the worse conditions the better result for me. In this respect I felt ready. On the other hand, I had exactly zero experience with any of the obstacles and OCR in general. And some of the best Spartans of the world were toeing the same start line. Who would prevail? Some might say that best way to prepare for Spartan, is to run Spartans. While others may say that to prepare for 24 hours in cold environment is to run 24 hours in cold environment. I would go with the latter, but the truth, of course, is somewhere in between, just get the right mix.

Getting ready for the start. 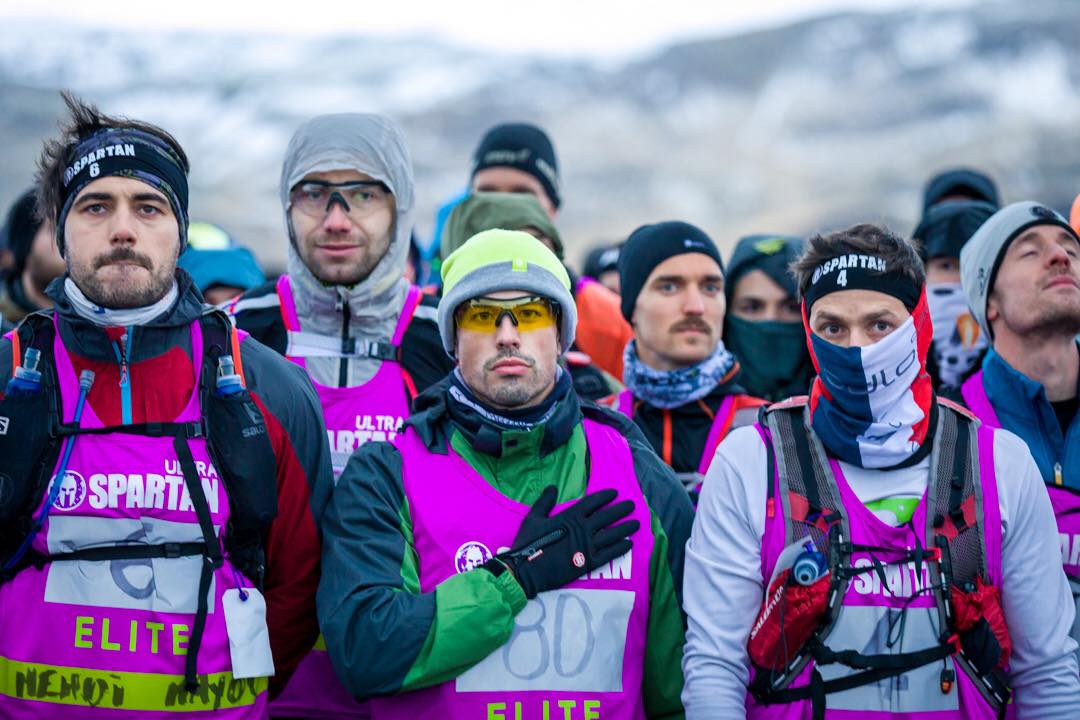 Calm before the storm, ready to go. 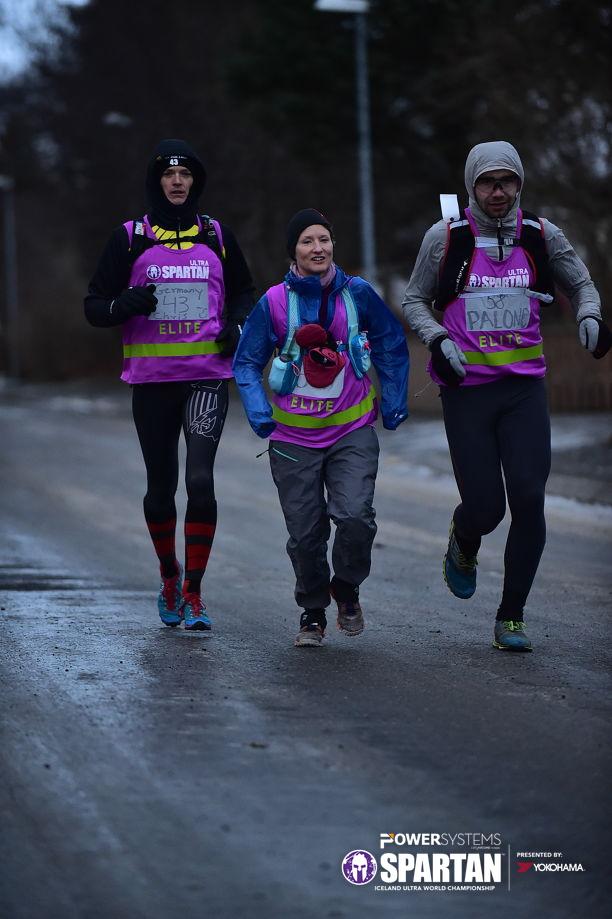 Taking it easy on prologue.

With all the Spartans on the start line I expected them to start at furious pace and that only later and I would slowly make my way up the rankings, passing zombie racers and those who went too fast too early. None of this happened. I started an easy pace, but that landed me in the leading group right away. I love technical downhills, so I moved to the 1st place on the downhill section of the 1st lap, only to be passed by Robert Killian at the burpee zone at the end of the lap. This time keeping the burpee count at 30. Next lap and the conditions at the top of the steep and icy climb got much worse – strong wind and quite cold up there. This was what I had expected from Iceland. Should the weather stay the same for some time or get even worse, the race would get really interesting. However, none of it happened – it rained for a while, but then the weather turned out really nice – no wind, no rain, and much warmer. Once again I passed everyone on the downhill, but this time I did really bad at the obstacles and I had to do a whopping 120 burpees! I had no idea what it was like to run after doing so many burpees, but I knew what it takes to race for another 20 hours and that I would need to pace myself. So I paced myself – especially on the burpees. After losing so much time due to my burpees and gaining some time thanks to fast transition I had absolutely no idea, where I was in the ranking. 120 burpees – should it happen once in a 24hour race, it is a mere detail. Should it happen every lap then I am in a serious trouble. 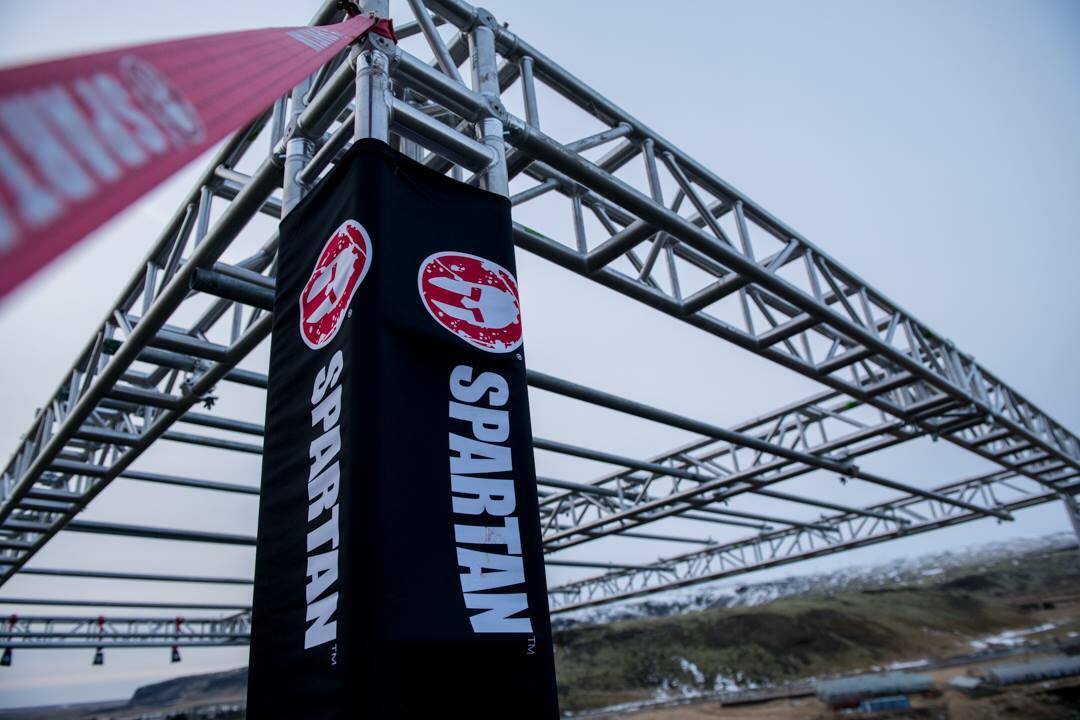 Monkey bars – it took me while to learn how to tackle them.

Fortunately, I had mixed success at Olympus, I stayed solid on tyrolean traverse and pike throw, while twister I have not even attempted to save time and energy. By the time reached the end of each lap I felt no power in my arms so I devised an original way how to tackle the Hercules Hoist – I started to coil the rope around myself – human spindle. And it worked! I also improved my TA procedure, that I took food and drinks for two laps at once, skipping a TA every other lap and saving some minutes. After three laps I was stripped of my race bib and got LAP LEADER bib (the TOP 5 on the leaderboard were given these bibs).  The gap to the first place has grown to some half an hour, but this was still a dream start! Six hours into the race and I was already in the third place! 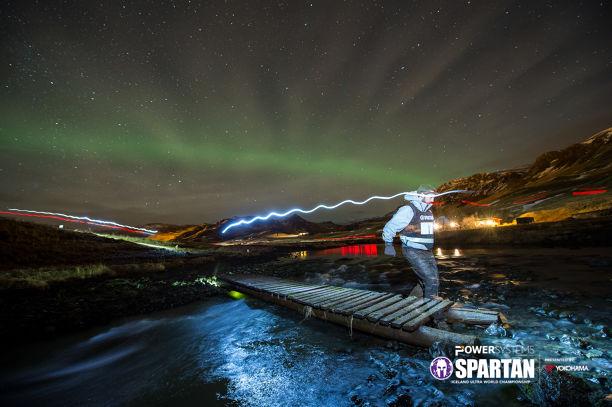 Going ovet this bridge every lap. 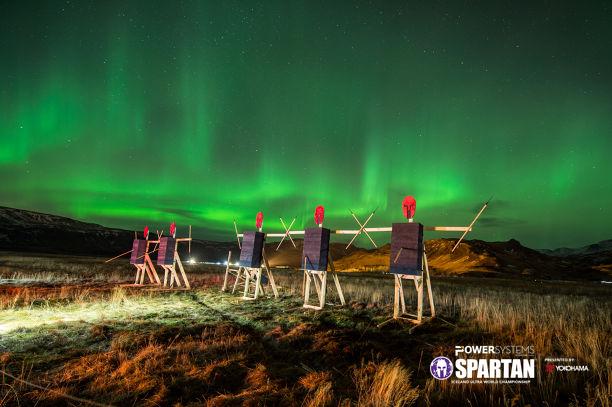 Pike – one of my favourite obstacles.

Burpees all the way

Even though I had to do some 60 burpees at the end of each lap, I had no troubles holding my 3rd place. The leaderboard was not really working, so the lady changing our burpee passports after each lap was the most reliable source of information. After some 7 laps and skipping TA once again I caught David Dietrich – the 2nd guy! He pulled away from me, but I could see that 2nd place was not a pie in the sky but a real target I could fight for. Right before 6 AM, after some 18 hours into the race, with 2 laps to go – we were three at the burpee area. Me, David and some other guy – holding 2nd, 3rd and 4th position, left the burpee are separated by less than 10 minutes. And I was the last one to leave! And there my perspective changed. I did not want to finish 4th! And I did not want to finish 3rd either. Suddenly third place did not look like holding a third place, but like losing second place. I skipped TA once again, pushed hard and in less than half a lap I caught David. I went on with pushing hard and I was able pull away from him. Now it all seemed too easy. I was never low in the race, but now I felt really strong, I was hitting it hard, even the sandbags and buckets did not feel that heavy. 30 burpees, quick TA and still no sight of David. Go fast, stay focused. 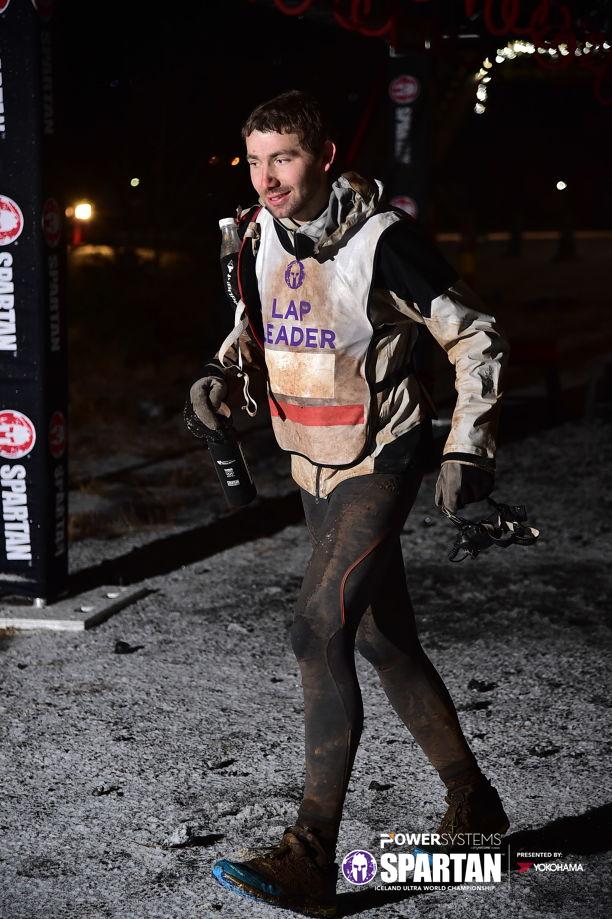 I had information about the gap to Joshua, who was leading the race. It seemed too big to catch him in lap, but I decided to give it a try. The chance of catching him was small, but if there was a non-zero chance, I would fo for it. At first sandbag carry I experienced a moment of elation when I spotted a racer in LAP LEADER bib ahead of me, only to realize, that it is not Joshua, but Rober Killian one lap back. Coming to the burpee zone was sort of homecoming. By the time I have got there I have completed over 500 burpees on gravel, my knees were burning and my abdominal muscles were pumping battery acid, yet the last set of 30 burpees I enjoyed in some perverse way. No hurry, no worries, enjoying the pain and suffering of the moment, as it were the last moments of my race. After 23 hours and some 12 minutes, I finally reached the finish line, with 11 full laps under my belt, meaning 2nd place at Spartan Iceland Ultra World Championship 2017. 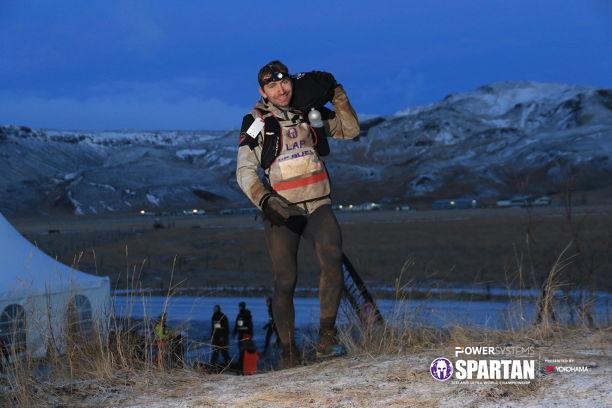 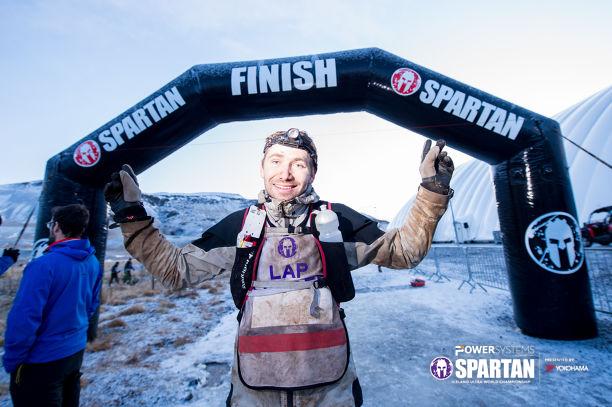 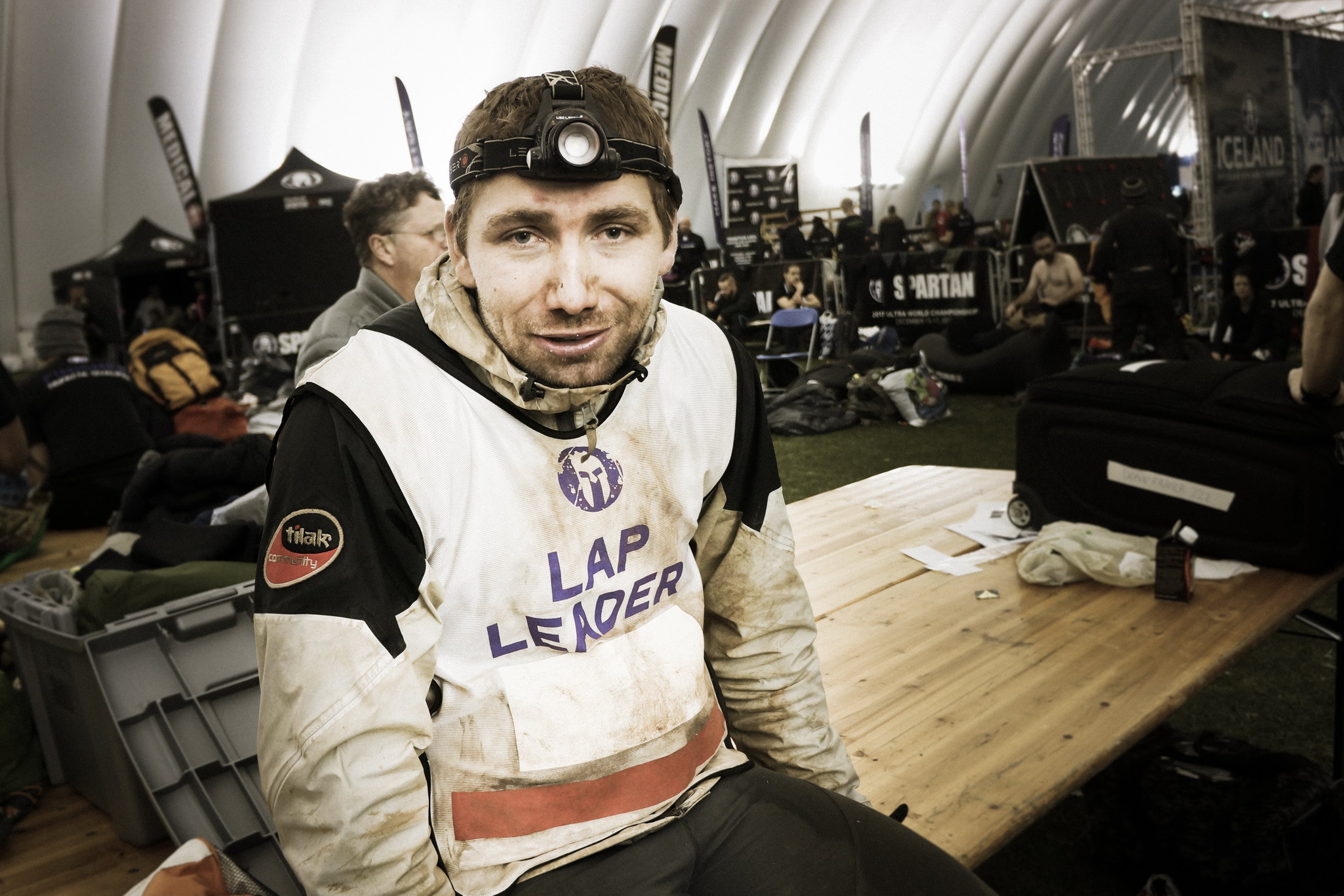 It’s over. Really happy with that.

At last but not least

After looking at the live stream and some discussions there is few things I would like to note:

I had never done a Spartan Race before, but I had done a lot of 24hour races and even much longer races in harsh conditions and/or altitude. I was relying on my experience with pacing, gear, nutrition as well as procedure in the transition area. Where I did not have any prior exprience, I humbly accepted the fact and tried to learn on the course [such as monkey bars, where I learned that cleaning your hands with a tiny towel right before obstacle greatly increases the chance of making it].

I have not done any specific training for Spartans, but I have been training with Andrle Sport and I was doing quite a lot of core excersise, balance exercise and similar stuff, which really helped along the race.

I had no idea how excessive number of burpees would affect my running, so I tried not to go too hard on the burpees and yes, I was pacing myself during the burpees.

At some point in the live stream I can be seen drinking RC Cola and some white fluid (reportedly milk). Well, RC Cola was the cheapest Cola I could get on Iceland, but that white fluid was no milk! I don’t drink milk. I am no vegetarian or vegan, I just don’t like it. In fact that white fluid was edgar.power drink, a cornerstone of my nutrition plan – mixture of carbs that produces no spikes in blood sugars and keeps them constant for some time – for me for up to 160 minutes. For smaller racers it can keep the levels even longer. And it worked great! I had almost no ups and downs or stomach problems, and was able do the final push in the last six hours. Exactly as planned. You can check edgar power drink here [and get a discount by entering a code PALONCY10].

I also could have looked tired early on the race, but as I said, that was pacing myself. I felt tired, really tired – half an hour after finishing. Was this my entry into the world of Spartan and OCR? Or was it just one-off event for me? I don’t know. Seed was planted, but there is many interesting races and adventures around but OCR seems more and more interesting to me.Let’s see what seed will grow into. 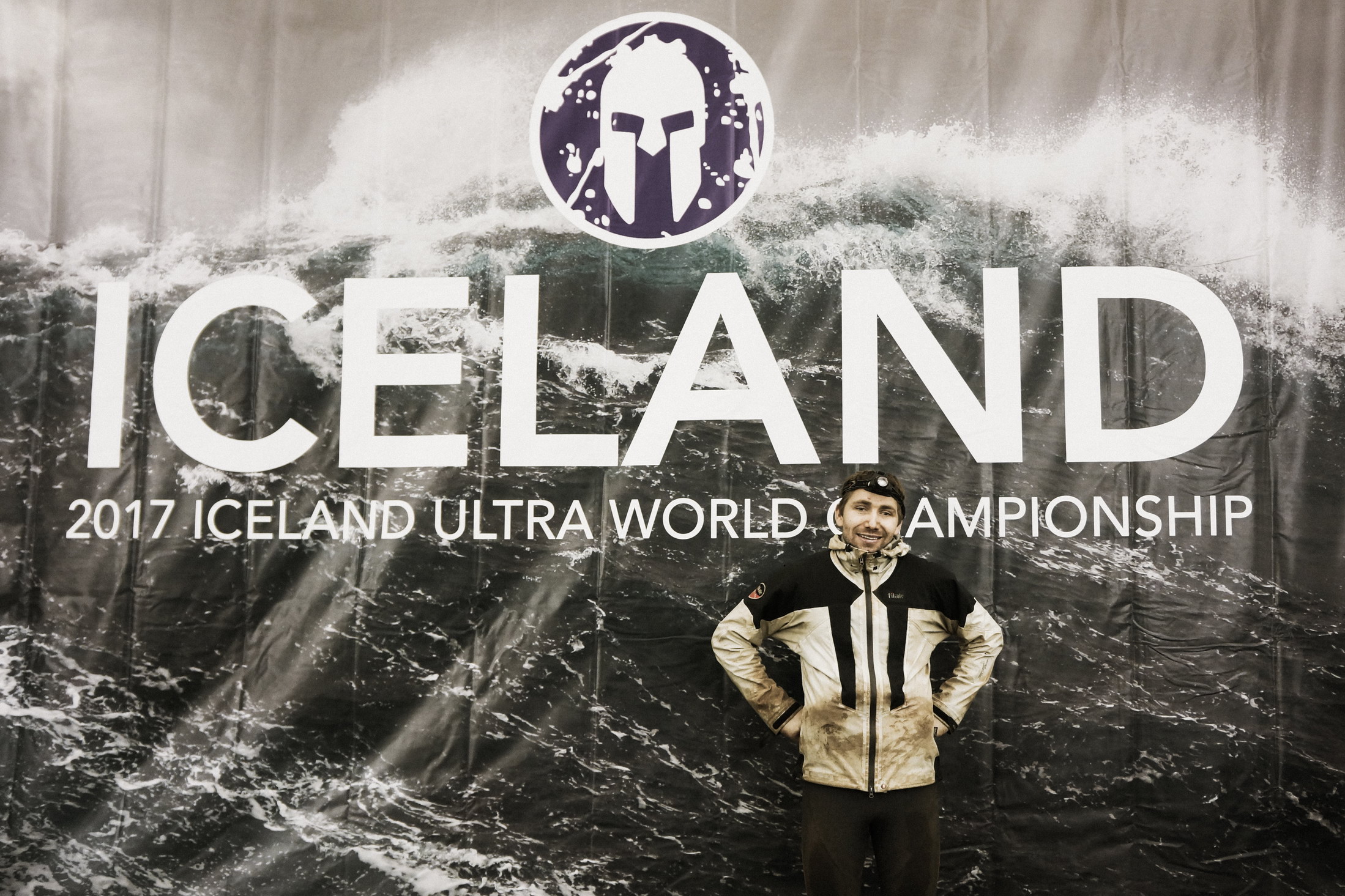 Iceland? Hope to be back sometimes. 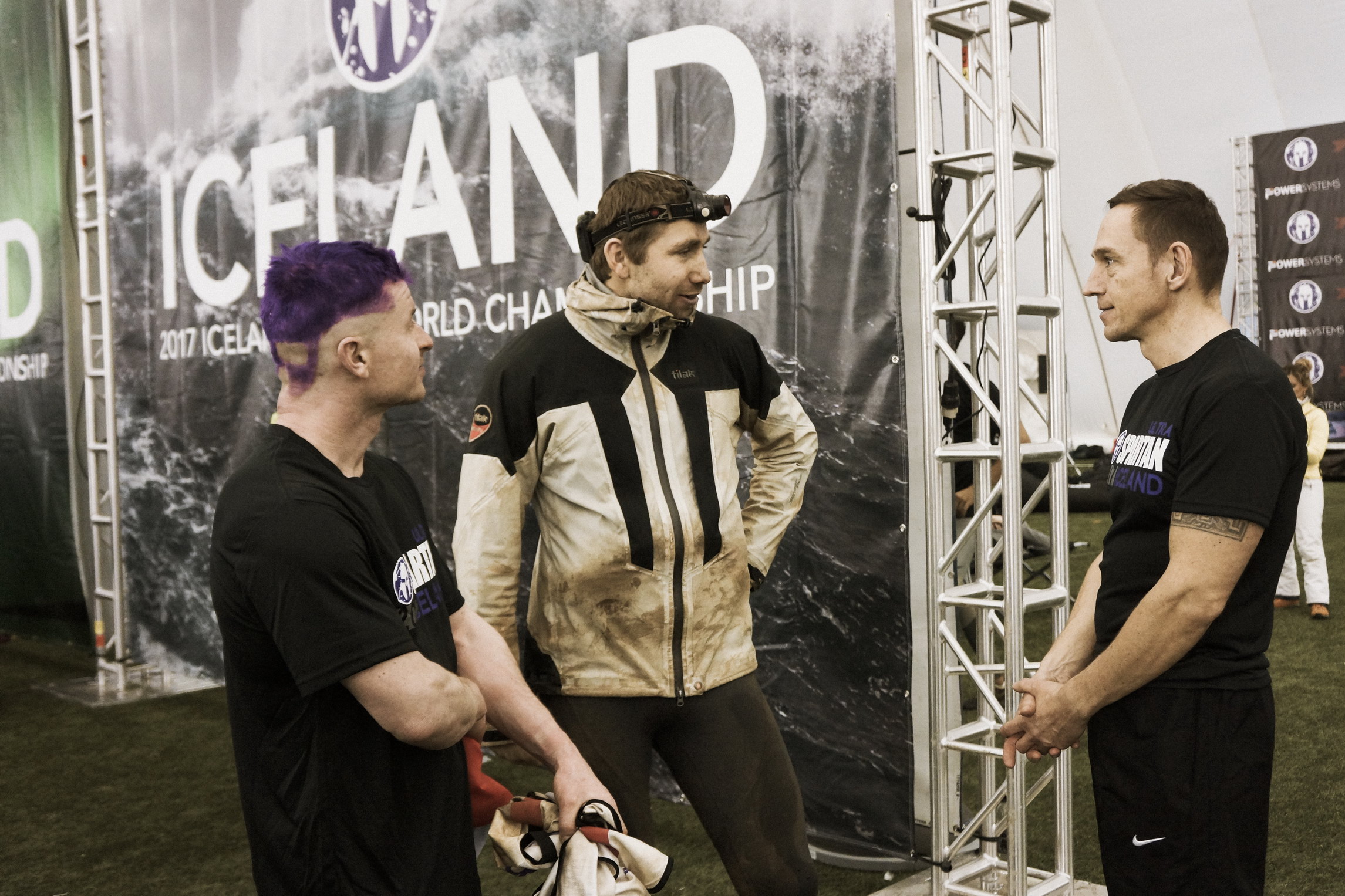